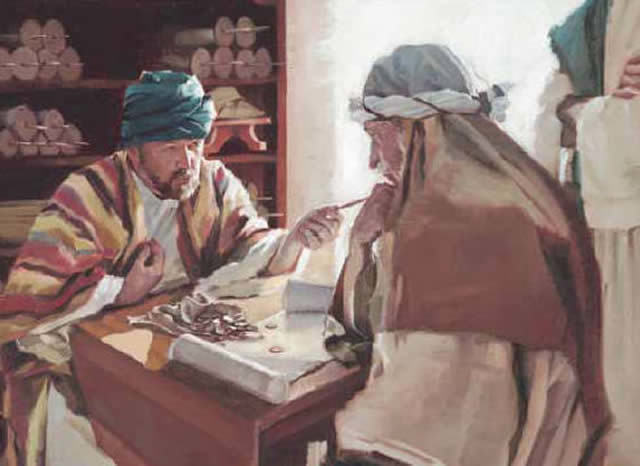 "He also said to His disciples: "There was a certain rich man who had a steward, and an accusation was brought to him that this man was wasting his goods. 2 So he called him and said to him, 'What is this I hear about you? Give an account of your stewardship, for you can no longer be steward.'"

Jesus uses parables to teach his disciples the eternal doctrines of the Kingdom of God. In this parable, the steward was entrusted with his master's goods, and he was to serve his master faithfully. Just like this steward, we have been entrusted with the manifold grace of God. God has called us and separated us to be faithful ministers in his Kingdom. The Apostle Peter instructs us when he writes, "As each one has received a gift, minister it to one another, as good stewards of the manifold grace of God" (1 Peter 4:10). Remembering and contemplating the life we once had in the world, we have to be grateful that God would count us worthy to place us in the ministry. The Apostle Paul thanked God for enabling and  putting him into the ministry even though he was formerly a blasphemer, persecutor and an insolent man (1 Tim 1:2).

When the master heard that his steward was wasting his goods, he immediately revoked his stewardship. We can see that the master was unwilling to tolerate a steward that was wasting his goods. This is reflected in the fact that he never gives the steward a second chance. Though the master required an account, it had no bearing on the servant's stewardship; his fate was already sealed, "for you can no longer be steward." God would not tolerate those servants who waste his goods. Brethren, are we wasting God's goods? Has his grace been given in vain? The Apostle Paul pleaded with the Corinthian believers when he wrote, "We then, as workers together with Him also plead with you not to receive the grace of God in vain" (2 Cor. 6:1). Brethren, we must not waste the grace of God bestowed upon us. We must remember that the Lord will require an account, and if found guilty, the punishment will be difficult to bear; "And cast the unprofitable servant into the outer darkness. There will be weeping and gnashing of teeth" (Matt. 25:30). I pray that the Lord will help us that when our ministry comes to an end, we may look back and confidently say, "His grace towards me was not in vain" (1 Cor 15:10).

Another important stewardship that God has entrusted to us is the stewardship of the earthly things we possess. Every man, especially a believer, must understand that every earthly thing one possesses belongs to God. He is the master of what we possess, and he expects us to faithfully use his goods to administer his interest rather than our own selfish and worldly interest. We will see the significance of this understanding as we progress through this parable.

"Then the steward said within himself, 'What shall I do? For my master is taking the stewardship away from me. I cannot dig; I am ashamed to beg. 4 I have resolved what to do, that when I am put out of the stewardship, they may receive me into their houses.' 5 "So he called every one of his master's debtors to him, and said to the first, 'How much do you owe my master?' 6 And he said, 'A hundred measures of oil.' So he said to him, 'Take your bill, and sit down quickly and write fifty.' 7 Then he said to another, 'And how much do you owe?' So he said, 'A hundred measures of wheat.' And he said to him, 'Take your bill, and write eighty.' 8 So the master commended the unjust steward because he had dealt shrewdly. For the sons of this world are more shrewd in their generation than the sons of light."

Herein is another lesson from this parable we as believers will be wise to take heed. The steward, having learned his stewardship is being taken away, resolved to do something about his future. He decided to befriend his master's debtor by shrewdly conniving his master, in regards to his account, in order to secure his future. Amazingly we are told that the "master commended the unjust steward because he had dealt shrewdly". We are not told that the master commended him because of his dishonesty but rather because he was shrewd (KJV 'wise') in his dealing. Therefore, it is the foresight, promptitude, and sharpness that the master found commendable and not the morality of his action. The master could no more approve of the steward's conduct as a moral act than he could the first act of cheating him.

Jesus draws a parallel from the parable and says, "For the sons of this world are more shrewd in their generation than the sons of light." There is here a solemn and a deep sorrowful reflection of the Lord in the realisation that a particular feature is lacking in the children of light but is abundant in the children of the world. Like the steward, the children of this world, though foolish in choosing their object of pursuit, are wise in the adaptation of means by which they pursue them. Consider the steward; he was not wise in choosing his end because it would have been better to remain as his master's steward by honestly administrating his goods than wasting it. Nonetheless, shutting out the morality of his action and the poor choice of his end, look how much of it that was wise: his foresight, fertility of resources, promptitude and discrete. There was a wise adaptation of a means to an end. Brethren, consider the children of the world who are unwise because their aim and end are constricted to this world. They only live for this life and pursue perishable things, yet they are wise in the virtues they employ in the pursuit of them. They pursue them painstakingly with much more skillfulness, and earnestness than the children of light do the eternal things. Consider how men will spend endless hours and devote persistence, diligence, self-denial in learning how to play upon some instrument to be great entertainers. And much more efforts do the people of this world spend in perfecting their profession than many believers spend in perfecting their walk with Christ! Ask yourself, do you make the same efforts to grow in the grace of the Lord Jesus Christ as you do to pursue the things of this world?

Brethren, we must take into heart these solemn words of our Lord Jesus Christ. We must realise how the unwise who choose the world as their portion, put us to shame in their absorption, devotion, self-denial, persistence, perseverance and in availing themselves of every opportunity to attain their worldly aim than we do the eternal things.

And I say to you, make friends for yourselves by unrighteous mammon, that when you fail, they may receive your into an everlasting home."

The unrighteous mammon is here referring to earthly riches. It is so termed unrighteous mammon not because it is procured through unjust means but rather in opposition to the true riches spoken in verse 11. In comparison to the heavenly riches, the earthly riches are unrighteous because they are deceitful, false and untrustworthy. Another thing to note is that what is translated as "when you fail" is appropriately and literally rendered as "when it fails" (interlinear Bible Luke 16:9). Indeed, the earthly riches will fail in the sense that it is perishable, corruptible and losable (Luke 12:33).

Having properly examined the passage before us,  let us now look at the principle conveyed by Christ here for us to follow. The children of the world, much like the steward, are wise to use the things of this world to advance their worldly interest; the children of God must also use this world in such a manner as to advance their spiritual interest. A practical example of this principle will be this; when a believer uses his earthly possession/riches to advance the interest of the Kingdom of God, for instance, win souls and spread the Gospel and support the brethren in need. Once those riches fail, he will be received by the everlasting fruits of these riches into an everlasting home (heaven). This is what is implied by the Apostle Paul when he commands Timothy to admonish those that are rich in this present world "not to trust in uncertain riches but the living God." So that they may "do good and be rich in good works, ready to give, willing to share," and by doing so, they will be "storing up for themselves a good foundation for the time to come" (1 Tim. 6:19). Oh! How wonderful it is, brethren, to realise that we can use our perishable riches to store up for ourselves the true heavenly riches that will receive us when we reach our everlasting home.

Our Lord in the above passage lays out before us a principle that is universally applicable and self-explanatory. What is referred to as "least" in the above passage is the earthly riches (unrighteous mammon) in the sense that it is of low value and contemptible. This is in opposition to the heavenly riches (true riches) which is of more excellent value. Therefore, if one is unjust and unfaithful in what is least value, he will also be unjust and unfaithful in what is of great value.

If you have not been a faithful steward of the earthly riches, who will commit to you the true riches? If you have foolishly squandered in pursuit of worldly aims the earthly possession which God has so entrusted into your hand - for all that we possess are not our own but God's- why would he trust you with heavenly riches. We must understand, brethren, that our earthly possessions are not our own but "another man's", Christ the Lord. Knowing, therefore, brethren that "we brought nothing into this world " and we are certain that "we can carry nothing out" since "the earth is the Lord's the fullness therefore" (1 Tim. 6:7, Psalms 24:1). Let us be wise and faithful in the stewardship of all the earthly possession God has entrusted into our hands. Let us use them to advance the Kingdom of God and the pursuit of the eternal things in Christ Jesus. The Lord will then give  us what is truly our own, the heavenly riches which will neither fade nor persih but will always be with us throughout eternity.